In my previous blog, I talked about how you can actually create videos in PowerPoint, save them as WMVs, and import them into other programs.

I also had another idea I wanted to try out in PowerPoint for my band’s music video. I had this image of six picture frames. I thought it would be cool if I could import six videos of us singing in the dark and put them into the picture frames to give it a spooky feel.

Using PowerPoint’s Remove Background, I was able to remove the oval shaped part of the picture frame image so that when I put the videos behind the frame, you’d see them through the oval hole. Just click on the image and the Format tab appears, click the Format tab and you’ll see the Remove Background option on the far left, click it to start making your adjustments. Once I removed the oval center of the picture frames it was time to start putting in the videos.

Importing and Editing the Videos in PowerPoint
To import each video; I clicked the Insert tab, and clicked the Video dropdown. I selected Video From File and browsed out to the WMV file I wanted to import and clicked Insert. The video appeared. Just like with any image in PowerPoint, I was able to resize it and crop it into a variety of shapes. I did the same process for all six videos; importing, sizing, and cropping them to fit within the picture frames.

After adjusting the playback and animation settings, I right-clicked on the image of the six picture frames and clicked Bring to Front from the pop-up menu. I did this part last because it was easier to work with my videos while they were still in the front.

Exporting from PowerPoint into Video
And just like in the previous lesson, I clicked File/Save As to save it as a WMV (Windows Media Video) file. Because of the six videos on this slide the saving process took a good amount longer, but as you can see, it worked out great!

As always, let me know in the comments if you have any questions about this whole process. I hope this inspires you to create some incredible videos using PowerPoint.

Well, I sure didn’t. So, with this new revelation about what I considered to be an
old-fashioned tool, I was able to create some pretty cool video images that I later imported into some other video editing software. The possibilities of what you could do with this are too numerous to mention here, so I will just focus on a few things I did, and show you how I did them.

As great as Storyline and even some of the video editing software out there is, there are still some animations and other things you can do in PowerPoint that you can’t in those other programs. For instance, I wanted to use a picture I had taken of a beautiful ceiling I saw while on vacation, crop it into a circular shape, and make it slowly spin. 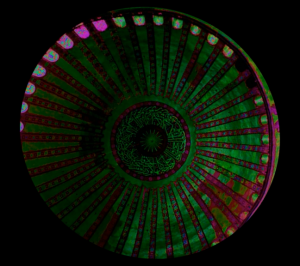 After cropping the picture into a circle, I used the Spin animation, set the timing to 20 seconds so it would spin nice & slow, and set the animation to start With Previous. I removed all the text boxes from the master slide and gave it a black background. Lastly, I clicked File/Save As, and saved it as a WMV (Windows Media Video) file.

I then imported it into a video I was working on for my band. I made it semi-transparent and put it on top of another live music video as an abstract visual effect.

In my next blog, I’ll show you another awesome thing I was able to do using multiple videos in PowerPoint. Until then, feel free to comment with any questions you may have.

Last week at Articulate’s E-Learning Heroes, David Anderson presented us with an interesting challenge to create a drag and drop activity that was not quiz-based. David gave us three options:

I actually created one in Storyline that was sort of a combination of numbers 2 and 3. Learners would drag and drop food items onto either a microwave or convection oven and get positive or negative feedback as to which was the best option. Then when they got all 4 food items in the right oven, they’d get a final confirmation saying they had successfully finished the job.

And when it gets dropped on the convection oven, to jump to the negative feedback slide. That was easy. 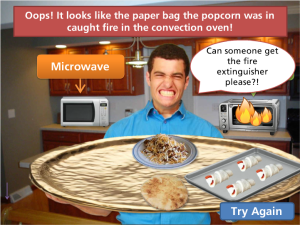 But, because there were 4 food items to drag and drop, I also wanted to take learners back to the drag and drop slide – and when they got back, to have the microwave popcorn disappear after they got it right. That way learners would only see the food items they hadn’t cooked properly yet, so they would know how far along they were in the exercise. 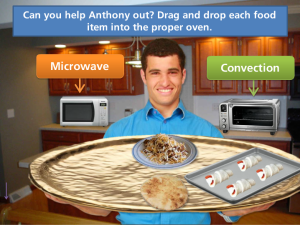 Create Variables
To make those items disappear at the right times, I had to create variables. In this case, the variables were named after the name of the food; pitabread, pizzarolls, chilidip, and popcorn. All 4 variables were true/false with an initial setting of false.

Create Triggers on the Four Positive Feedback Slides
Then on all the positive feedback slides for each of the 4 foods, I created a trigger. The trigger would say for example, that when the timeline starts on the positive feedback slide for the microwave popcorn, that the popcorn variable would change to a value of true. Because the only way the learner would have gotten to that slide would be if they had dropped the microwave popcorn onto the microwave oven, and so the popcorn was cooked properly.

I then set up the same combination of triggers and states to the pita bread, the chili dip, and the pizza roll pictures.

So to summarize this: I…

One Final Slide
And finally, after the learner got all 4 foods into the right ovens, I set up one more trigger to take them to a final slide showing the guys on the couch with all their munchies watching the Super Bowl – all smiles. Since I’d already created the triggers and variables for the 4 foods, I just added one more trigger to the drag and drop slide saying that when all 4 variables changed to true, to jump to this final slide. 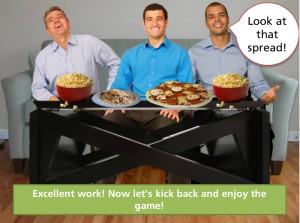 To run the complete exercise for yourself, click here. I know this process was a bit complicated, so feel free to write me if you have any questions or comments.